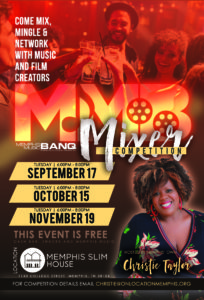 The time has come for Film and Music Creators to come together!!!

The MMB Mixer Competition pair filmmakers with MMB Music Creators in teams to see who can create the Best Sync Project.  Projects are judged on four categories: 1. Choice of Music, 2. Quality of Music Sync with Video, 3. Does the music compliment the scene, and 4. (Voted by Audience) Does the teams three projects invoke the intended emotion.

The judges score and audience vote will determine the Team Winners for each night.  The winner will be announced on the Memphis Music Banq website.

Team Prize:  Team Filmmaker gets Cash plus Festival Music License for the song for the project / Team Music Creator gets PAID for their music placement.

Learn about the Memphis Music Banq – Talk to MMB Representatives about licensing music or becoming an MMB Music Publisher.