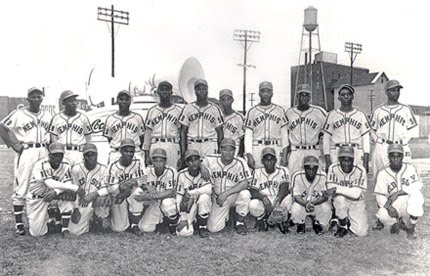 The On Location: MEMPHIS International Film & Music Fest has programmed an all-University of Memphis Film program for Sunday afternoon, April 28th at Malco Studio on the Square.  Starting at 3:30 p.m., the program will consist of three new short films by graduate students and faculty, followed by the first public screening of a new digital transfer of the hour-long documentary BLACK DIAMONDS, BLUES CITY: STORIES OF THE MEMPHIS RED SOX.

BLACK DIAMONDS enjoyed a successful run at film festivals and was seen on public television stations nationwide when first released over 15 years ago.  Narrated by Samuel L. Jackson and featuring wonderful archival photographs by Ernest Withers and The Hooks Brothers studio, the film was written and directed by Steven John Ross, Professor of Film and Video in the Department of Communication, and produced by Ross and Mathematics Department Chair John Haddock.  Ross was enthusiastic when asked about this latest version. “I am pleased to say that with the new digital transfer, the film looks better than ever.”

Although Ben Hooks, Rufus Thomas, and B.B. King all appear prominently in the film along with several former Negro League ballplayers, the real stars are the extraordinary human beings who had played for the Red Sox during the team’s prime – Marlin Carter, Casey Jones, Frank Pearson, the great left hander Verdell Mathis, and Joe B. Scott.  Mr. Scott’s recent death marked the passing of the last member of this core group.  “Having this screening now, after losing Joe, feels like the right thing to do,” said co-producer Haddock.

“Jackie Robinson was a boyhood idol of mine,” said Ross, “as he was for millions of Americans, and I am glad the new film “42” will tell his story to a new generation of moviegoers.  But I think the guys in our film represent the true unsung heroes of baseball during the Jim Crow era, and their stories are as compelling in their own way as Robinson’s is.”

Ross adds that “the film is as much about race relations in the mid-century mid-South as it is about baseball.  For instance, a significant section of the movie details how the owner of the team, Dr. J.B. Martin, was run out of town by Boss Crump after refusing to back FDR in the 1940 presidential election.”

The Red Sox were an integral part of the lives of African Americans of all socioeconomic levels at a time when segregation was the norm.  “It was more than just baseball,” said Ross.  “We tried to show in the film how baseball was indeed a venue where the African American community was able to create a valid and valued life of its own, despite the shortsightedness of the larger society at the time.”  Haddock quotes Ben Hooks, who concludes the film with this statement:  “(The Red Sox) were an expression that we had come a long way.  We were able to build a life, to build a culture, in a rigidly segregated society that told you that you were nobody.  We proved to folks, and, most of all, to ourselves, that we were somebody.”

There will be a Q and A following the screening.  The filmmakers hope they won’t be alone on the stage.  The festival is inviting some of the former Red Sox who played with the team in the 1950’s -after its heyday – while it and the Negro Leagues as a whole struggled to survive following the integration of major league baseball.

The other films being screened include Ross’s latest effort, the 25-minute Four Scenes from “King Lear.”  Based on the Ostrander Award-winning New Moon Theatre production directed by Anita Jo Lenhart at Theatreworks, the project completely restaged four scenes for the camera. The scenes feature noted Memphis actors Bill Baker as Lear, Christina Wellford Scott as Goneril, James Dale Green as The Fool, Heather Malone as Cordelia, and Greg Boller as Kent.  As Director of Photography, graduate student Stephen Hildreth headed a Film and Video Production Program student crew working under the direction of Ross and Lenhart, who is an Associate Professor in the University’s Department of Theatre.

Stephen Hildreth is also represented by Yellow Light, a caustic and comic 15 minute look at romance which he produced with director Brian Fruits, an MFA student in the Theatre Department.  It was shot in Chicago, largely because Fruits and Hildreth felt so strongly about casting the two female leads, Lauren Scott and Katie Zisson, both recent grads of the University’s Theatre program who are now pursuing their acting careers in the Windy City.

In the summer of 2012, Film –Video graduate student David Goodman and his mother drove to the west coast to scatter the ashes of their lost loved one, Joseph. Ash Requiem chronicles the journey and the three significant places where ashes were scattered. This is a highly personal short documentary about the loss of a brother and a son. The film combines footage of the road trip with remembered moments both sad and humorous of a person who now lives only in memory.  Ross was unstinting in his praise of this film, for which David Appleby served as project advisor. “This is, I think, the finest documentary film ever made by a graduate student in our program.”

PrevOn Location: MEMPHIS Fest Returns to Malco Studio on the Square!
NextTake a Look at the Official Fest Poster!