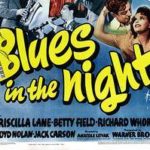 Blues in the Night is an American musical released by Warner Brothers in 1941, directed by Anatole Litvakand and starring Priscilla Lane, Richard Whorf, Betty Field, Lloyd Nolan, Elia Kazan, and Jack Carson. The project began filming with the working title Hot Nocturne, but was eventually named after its principal musical number “Blues in the Night”, which became a popular hit.  The film features the band of Memphis’ own Jimmie Lunceford.

In 1927, while an athletic instructor at Manassas High School in Memphis, Tennessee, Jimmie organized a student band, the Chickasaw Syncopators, whose name was changed to the Jimmie Lunceford Orchestra. Under the new name, the band started its professional career in 1929, and made its first recordings in 1930. Lunceford was the first public high school band director in Memphis. After a period of touring, the band accepted a booking at the Harlem nightclub The Cotton Club in 1934 for their revue ‘Cotton Club Parade’ starring Adelaide Hall. The Cotton Club had already featured Duke Ellington and Cab Calloway, who won their first widespread fame from their inventive shows for the Cotton Club’s all-white patrons. Lunceford’s orchestra, with their tight musicianship and the often outrageous humor in their music and lyrics, made an ideal band for the club, and Lunceford’s reputation began to steadily grow. Jimmie Luncefords band differed from other great bands of the time because their work was better known for its ensemble than its solo work. Additionally, he was known for using a two-beat rhythm, called the Lunceford two-beat, as opposed to the standard four-beat rhythm.[9] This distinctive “Lunceford style” was largely the result of the imaginative arrangements by trumpeter Sy Oliver, which set high standards for dance-band arrangers of the time.  Though not well known as a musician, Jimmie Lunceford was trained on several instruments and was even featured on flute in “Liza”.