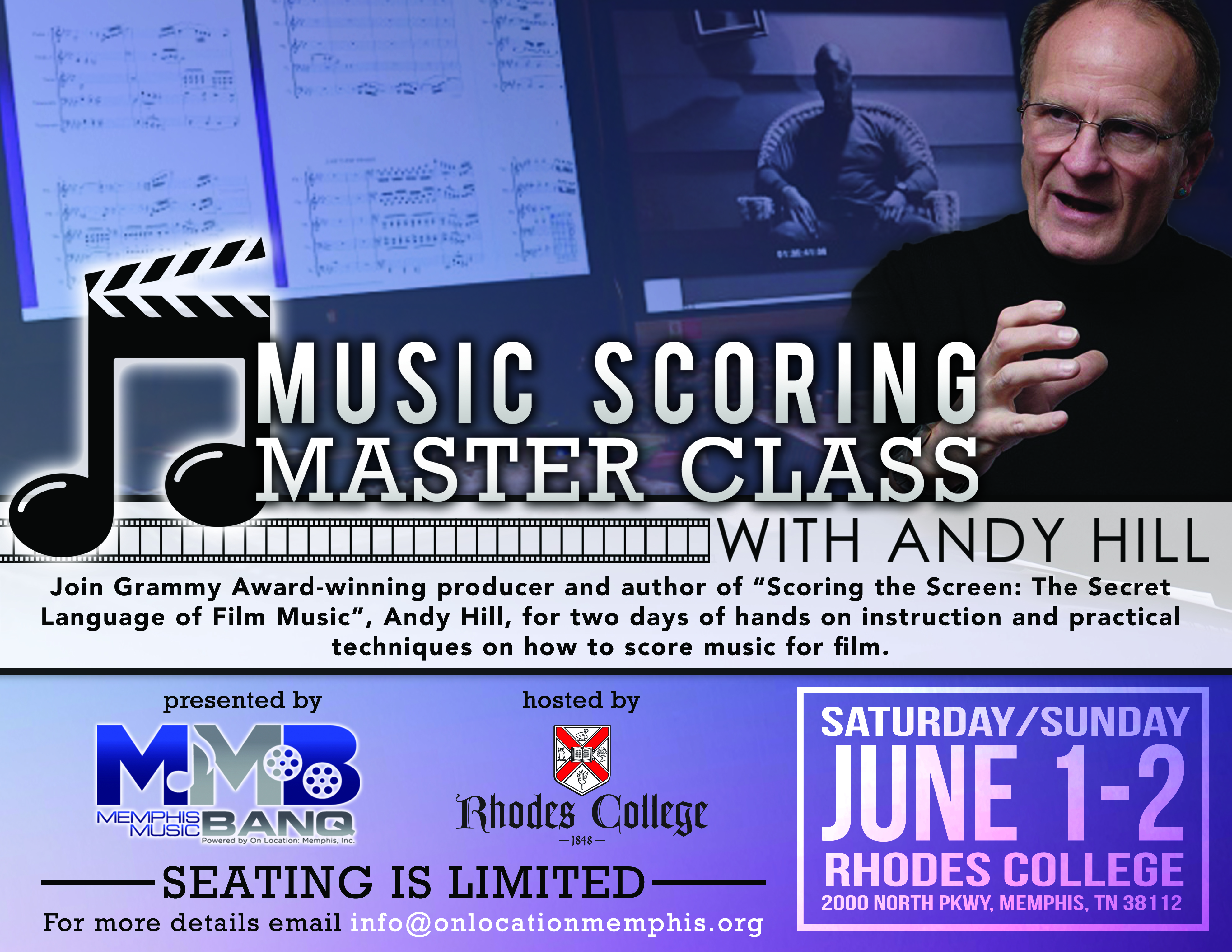 Rhodes College and the Memphis Music Banq  team up to offer a two day Music Scoring Master Class, June 1 & 2, 2019, With Grammy winning producer Andy Hill.  Music scoring is an essential skill for anyone who wants to build their career licensing music for film or TV. This class is for songwriters/producers, with equipment access, because you will have a class assignment. The cost is $180 for the two days, which include lunch. Space will be limited. If you want to secure a spot, send a message to angela@onlocationmemphis.org to request PayPal Invoice.

From 1987-1996, Andy served as vice-president of music production for Walt Disney Pictures, overseeing music production on a roster of films which included The Lion King, Beauty and the Beast, and Sister Act, and working closely with composers and songwriters such as Alan Menken, Howard Ashman and Hans Zimmer. Films for which Hill supervised music under the aegis of the Disney music department have earned nine Academy Awards in music categories. Subsequent to his term at Disney, Hill opened Andy Hill Film + Music under the auspices of Modern Music and supervised projects which included Message In A Bottle, Ed Wood, James and the Giant Peach and Happy Feet, winning a Grammy Award in 2000 as producer of the Best Musical Album for Children for Elmo In Grouchland.

In 2003, Hill began offering summer scoring workshops via the Los Angeles extension of Columbia College Chicago, and this led in 2006 to his appointment as director of the college’s first full MFA program, Music Composition for the Screen. The boutique program graduated more than 50 composers and became a pioneer in the use of post-graduate professional internships as an entrée to the highly competitive world of motion picture scoring. In 2011, he was engaged to oversee preparation and launch of a similar program, Scoring for Film, TV and Videogames, for the international campus of the Berklee College of Music in Valencia, Spain. There, Hill developed professional relationships with leading Spanish film composers such as Alberto Iglesias and Javier Navarrete. This established a base in Europe, and in 2013, he formed Cinemuse VOF for music supervision and production services and affiliated himself with the Galaxy Studio Group in Mol, Belgium, where he now serves as executive soundtrack producer and pilots the post-production facility’s drive to develop international business in scoring.

You may use Garage Band or Ableton Live, but you will be limited in some ways. The thing that the DAWs have in common is that they can import a video clip and sync it with the music, and this synchronization is the criticalelement in scoring.

Could a student without a laptop or DAW take the course and gain something? Yes. All of the lecture material and analysis would still benefit you. But you would not be able to compose music or have you music heard and critiqued in class. Contact Max at music@onlocationmemphis.org if this is your situation.

All of the major DAWs come bundled with a basic digital instrument library (these are the actual sounds—violins, piano, percussion, synthesizers, etc.—you will write for). There are dozens, if not hundreds, of premium digital instrument libraries that can cost from $299 to more than $2000. These are what the pros use. The best value for beginners is called the East-West Composer Cloud, because it offers a wide range of instruments for a monthly subscription of, we think, $19.99, that can be cancelled at any time. It works on Mac or PC. It may be a good idea to subscribe for at least the month of the class.